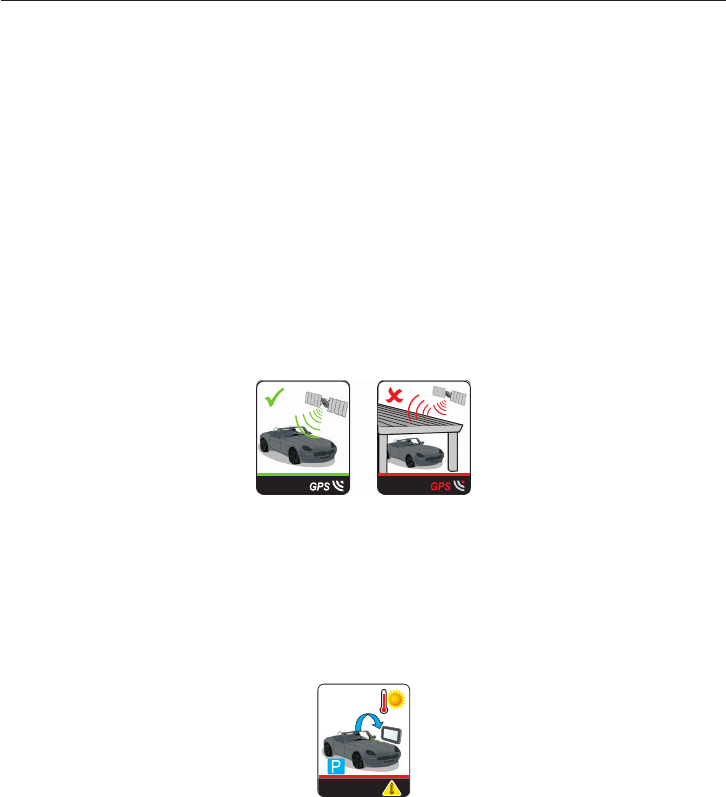 52
Reference
What is GPS?
The Global Positioning System (GPS) is available at any time, free of charge, and
is accurate to within 5m (15ft). GPS navigation is made possible by a network
of satellites that orbit the Earth at around 20,200km (12,552mi). Each satellite
transmits a range of signals which are utilized by GPS receivers, such as your
Mio, to determine an exact location. Although a GPS receiver can detect signals
from up to 12 satellites at any time, only four signals are required to provide a
position or "GPS x" (latitude and longitude), for vehicle navigation systems.
How does my Mio receive GPS signals?
Your Mio receives GPS signals via the internal GPS antenna. To guarantee
the optimum GPS signal strength, ensure your Mio is outdoors, or in a vehicle
outdoors, and has an unobstructed view of the sky. GPS reception is not usually
affected by weather; however, very heavy rain or snow may have a negative effect
on your reception.
Caring for your Mio
Taking good care of your Mio will ensure trouble-free operation and reduce the
risk of damage to your Mio:
● Keep your Mio away from excessive moisture and extreme temperatures.
● Avoid exposing your Mio to direct sunlight or strong ultraviolet light for
extended periods of time.
● Do not place anything on top of your Mio or drop objects on your Mio.
● Do not drop your Mio or subject it to severe shock.
● Do not subject your Mio to sudden and severe temperature changes. This
could cause moisture condensation inside the unit, which could damage
your Mio. In the event of moisture condensation, allow your Mio to dry out
completely before use.