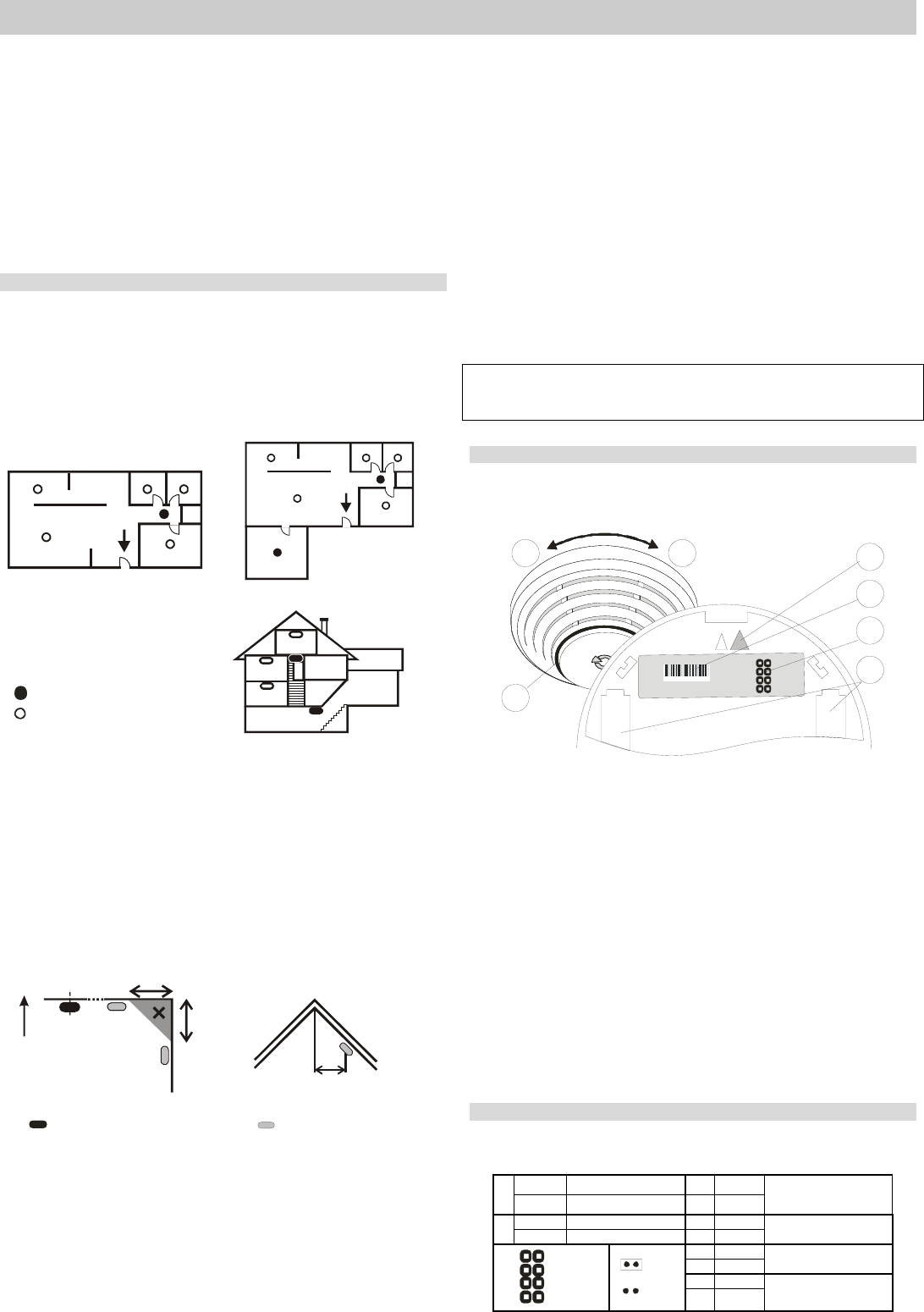 The JA-82ST wireless combined smoke and heat detector MZZ57300
The JA-82ST wireless combined smoke and heat detector
The JA-82ST is a wireless component of the JABLOTRON ALARMS
OASIS security system. It is used to detect fire hazards in the interior of
residential or commercial buildings. It is not designed to be installed in
industrial premises. The JA-82ST detector uses wireless communication
and it is powered with three AA 1.5V alkaline batteries.
The JA-82ST consists of two independent detectors – an optical
smoke detector and a heat detector. The optical smoke detector works on
the principle of scattered light and is very sensitive to large dust particles
which are present in dense smoke. It is less sensitive to smaller particles
generated by the combustion of liquids such as alcohol. That is why there
is also a built-in heat detector which has a slower reaction but is much
better at detecting fire which generates heat quickly with a small amount
of smoke. The microprocessor performs digital analysis of these values
which markedly increases false alarm immunity.
Detector range
The smoke detector must be installed so that any smoke easily drifts
into the detector, e.g. on the ceiling. It is suitable for residential buildings
but not suitable for free spaces, outdoor environments or interiors with
extremely high ceilings (above 5 m) where fire by-products can disperse
over a large area – the smoke would not reach the detector position.
The detector must always be placed in the section leading to the exit
of the building (escape route), see Figure 1. If the building has a floor
area greater than 150 m2, installation of an additional detector in some
other suitable place is required, see Fig.2.
1
2
33
4
Fig 1
2
1
3
3
4
3
Fig 2
1-kitchen
2-living room
3-bedroom
4-children’s bedroom
- Basic security
- For more security
1
3
3
3
Fig 3
For large buildings it is recommended to place additional detectors in
rooms where people sleep and in rooms with an increased risk of fire -
see Fig.3.
Installation on level ceilings
Place the detector in the centre of the room if possible. The detector
must not be recessed into the ceiling due to the possible existence of a
cool air layer on the ceiling. Never place the detector in the corner of
the room though (always keep at least a 0.5 m distance from the corner)
see Fig 4.
Installation on sloping ceilings
If the ceiling is not suitable for mounting on a level surface (e.g. a
room under a roof ridge), the detector can be installed as in Fig. 5
0.5m
TOP
Fig 4
0,9 m
Fig 5
centre of the room, best location acceptable location
Walls, partitions, barriers and lattice ceilings
The JA-82ST detector must not be installed closer than 0.5 m
from any wall or partition. A narrow room with a width of less than 1.2m
requires the detector(s) to be placed at a distance of at least one third of
the room’s width away. In the case of separating walls (partitions,
warehouse objects) which do not reach the ceiling, the space is
considered to be fully separated if the gap between the top of the
separating wall and the ceiling does not exceed 0.3 m. A free space
of at least 0.5m is required under the detector. Any irregularities of the
ceiling (e.g. girders) exceeding 5 % of the ceiling height shall be
considered a wall and the above mentioned limitations shall apply.
Ventilation and air circulation
The detectors must not be installed directly by a fresh air inlet
(e.g. air conditioning vents). In the case of air being supplied through a
perforated ceiling, each detector must be placed so that no perforation
hole occurs within 0.6m of the detector.
Avoid installing the detector in the following locations:
 places with poor air circulation (niches, corners, apexes of A-
shaped roofs, etc.)
 places exposed to dust, cigarette smoke or steam
 places with over-intense air circulation (close to ventilators, heat
sources, air conditioning outlets, etc.)
 in kitchens and other cooking places (because steam, smoke or oily
fumes can reduce detector sensitivity).
 beside fluorescent lights (electrical interference can cause a false
alarm)
 in areas with lots of small insects
Please note: Most false alarms are caused by improper
detector location.
See CEN/TS 54-14 standards for detailed installation guidelines.
Installation
The detector should be installed by a trained technician with a valid
certificate issued by an authorized distributor. Abide by the procedures
recommended in the previous paragraphs.
1 2
3
1400- 00- 0000- 00 01
5
4
6
INS
MEM
SMOKE
TEMP
+ -
7
Fig 6: 1– detector cover opening; 2 – detector cover closing; 3 – optical status
signalling; 4 – arrow showing where to insert the detector; 5 – enrollment code; 6 –
configuration terminals; 7 – battery holders
1. open the detector cover, by turning it anti-clockwise (1)
2. attach the removed plastic base to the desired place with screws (not
shown above).
3. set the configuration terminals (6) according to the table below.
4. Proceed according to the control panel installation manual. Basic
procedure:
a. Switch on the enrollment mode in the control panel.
b. When you insert all batteries into the detector, the enrollment code
is sent to the system – its sending is confirmed with a short flash of
the LED indicator (3).
c. The control panel confirms the enrollment with a flashing of the “A“
LED on the system keypad at the corresponding position.
5. Insert the detector into the plastic base. The detector can be inserted in
the plastic base in one position only. It is marked with arrows (4) on both
plastic parts. Close the detector cover by turning it clockwise (2).
Note: The detector can also be enrolled into the system by entering its
enrollment code (5) in the O-Link program. (Enter the last 8 digits under
the bar code).
Detector setting
The detector properties can be set in the Detectors window in the
O-Link program and with the configuration terminals.
ON
Instant alarm
3 OFF
1
OFF
Fire alarm
4 OFF
smoke (EN 54-7) or
heat (EN 54-5)
ON
memory enabled
3 ON
2
OFF
memory disabled
4 OFF
smoke only (EN 54-7)
(not heat)
3 OFF
4 ON
heat only (EN 54-5) (not
smoke)
3 ON
1
2
3
4
INS
MEM
SMOKE
TEMP
ON
OF
F
4 ON
Both smoke and heat
(both conditions at the
same time)